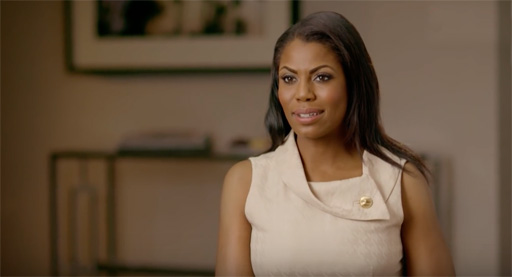 Omarosa Manigault Newman, who entered the Donald Trump orbit as a villainess on his reality TV show, The Apprentice, has apparently resigned her position in the Trump administration.

The White House issued this statement:

“Omarosa Manigault Newman resigned yesterday to pursue other opportunities. Her departure will not be effective until January 20, 2018. We wish her the best in future endeavors and are grateful for her service.”

Omarosa held the title of director of communications for the Office of the Public Liaison, although no one really seems to know what that entailed.

During her time with Team Trump, she reportedly showed up unannounced with a 39-member wedding party, wandering around the grounds of the White House taking pictures. Shortly after that episode, she was banned from posting White House photos.

And then, of course, right after Trump’s election she indicated that Trump had an “enemies list,” telling the Independent Journal Review, “it’s so great our enemies are making themselves clear so that when we get into the White House, we know where we stand.”

Okay the White House still contends Omarosa signed a resignation letter. But Gen Kelly Kicked her out will high drama with the Minister offering vulgarities and curse words as she was escorted out of the building and off campus— AprilDRyan (@AprilDRyan) December 13, 2017

According to multiple sources Omarosa did not resign. She was even escorted out of he building and off campus.— AprilDRyan (@AprilDRyan) December 13, 2017

Sources say General Kelly did the firing and Omarosa is alleged to have acted very vulgar and cursed a lot and said she helped elect President Trump. The word is a General Kelly had it and got rid of her.— AprilDRyan (@AprilDRyan) December 13, 2017

I heard there was drama and she was escorted out of the building and off campus— AprilDRyan (@AprilDRyan) December 13, 2017

This is not the first firing for Omarosa from Trump!— AprilDRyan (@AprilDRyan) December 13, 2017