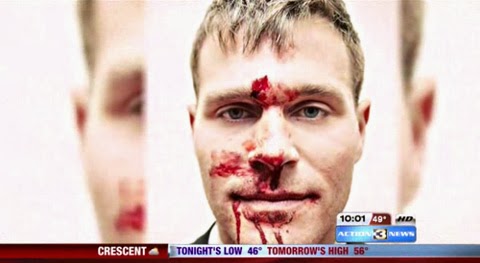 Ryan Langenegger, a straight man in Omaha, was punched, beaten and left with a bloody gash and chipped teeth for standing up for his gay friends.

KMTV has the story:

Out with two of his gay friends in the Old Market Saturday night, they decided to grab a bite at PepperJax Bar and Grill.

Inside a group of three guys started to verbally harass his friends. Ryan said, to avoid confrontation they left PepperJax.

The three men followed them outside.

Ryan stepped forward and tried to stop the incident. Instead he took a hard blow to the face.

“It’s sad, it’s really sad, disgusting. It just makes no sense this day and age and in Omaha, for all of this stuff to still be happening and out in the streets.”

A police report was filed but the attackers were long gone by the time police arrived at the scene of the attack.  However, surveillance video and credit card records may end up identifying them.

Check out the news report at KMTV.