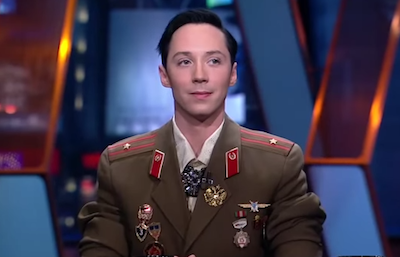 Earlier this week, former Olympic ice skater Johnny Weir made news for calling gay activists from Queer Nation “idiots” for protesting outside while he gave a speech at Barnard College.

He has now issued an apology for using the word “idiots” saying he felt “like a threatened underdog:”

“I was speaking at a university and called a small group of people protesting my speech, idiots, for no other reason that my tongue getting away from me.

This kind of talk is usually relegated to the safety of my own friend groupings and family but for some reason, I felt like a threatened underdog and needed to take a dig at the people who had me on edge.

At the end of my speech I opened the floor to a Q&A and it turned out that those very people protesting my speech, were actually friends of the faculty and brave LGBT activists who stood in the same room as me.

I felt, and still feel, a great deal of remorse for allowing myself to insult other people, fighting in their own way, and for using insulting words instead of my usual cheerleading antics for one and all.

I have put my foot in my mouth before, and I probably will many times over, but it doesn’t change the fact that I stooped to fighting by slinging insults rather than being proud of my own voice and achievements and saying, my opinion matters too. I showed myself a lesser version of myself that night, and I’m glad I learned from it.”

Weir has been criticized by many in the LGBT community for becoming part of NBC’s Olympic coverage team for the Sochi Olympics due to Russia’s current anti-gay laws.