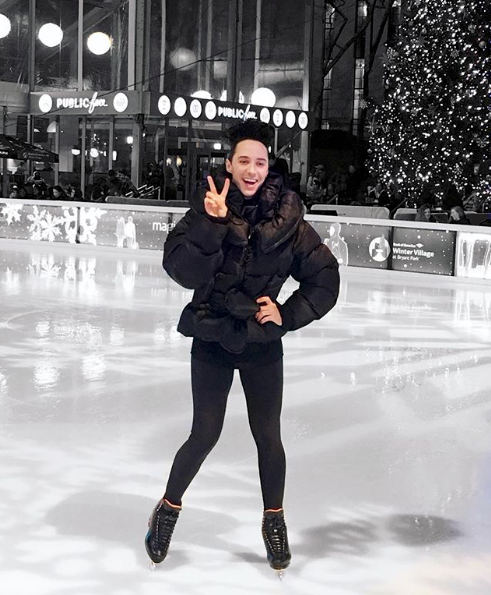 With attention on out Winter Olympic athletes Adam Rippon and Gus Kenworthy heading to the South Korea games, two-time Olympic figure skater Johnny Weir got himself into some hot water after tweeting:

“Happy that there are representatives of the LGBTQ community competing at the Olympic Games. Notably, @guskenworthy, @Adaripp & several more. I never ‘came out’ in sport because being gay was something born in me & had nothing to do with my skating. I never came out as white…”

There was such an outpouring of digust as Weir seemed to compare sexuality with race that he eventually deleted the tweet saying, “Sometimes there just aren’t enough characters to finish a thought.”

And with that, he shared this thread of tweets to clarify his position:

I am so thrilled that there are out representatives of the LGBTQ community competing at the Olympic Games. Notably, @guskenworthy ⛷ & @Adaripp ⛸ among others. It is very brave for all of us to live our truths whether on the global stage or in our own homes.

Because of the attention on those athletes, many of you have written or tweeted because I am not referred to as “out” at either of my Olympics and in the traditional sense I wasn’t.

I wear my sexuality the same as I wear my sex or my skin color. It is something that simply is and something I was born into. I never “came out” in sport because I didn’t imagine it as a great secret & it had nothing to do with my skating or my dreams.

I was extremely lucky to grow up in a family/community of acceptance and perhaps that’s why I don’t see my sexuality as something that needs addressing. I am forever indebted however, to the warriors who came before me that allow me to lead the life I do so openly.

Many of you got upset last night when I tried to finish that thought in one tweet so I thought it needed clarification. I’ve got a busy day ahead so excuse me while I lotion…

Now, with his swan-like costume and red glove (named “Camille”) at the 2006 Torino Olympic games, I doubt anyone was wondering about Weir’s sexuality.

That said, Weir has shared in the past that he’s not a “rainbow flag waver” when it comes to LGBT activism.

In any case, I am a fan of athletes who do stand up and come out so young folks have heroes to look up to.

So, kudos to Rippon and Kenworthy for living their authentic selves as they head to the 2018 Winter Olympics.