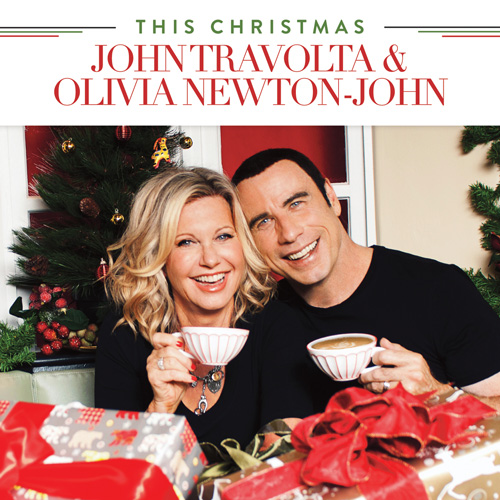 John Travolta and Olivia Newton-John reunite for the first time in 30 years for THIS CHRISTMAS Album to be released Nov. 13.

LOS ANGELES, Oct. 2, 2012— When your first single from the Grease album, the biggest movie musical of all time, is chart-topping “You’re the One That I Want, and it becomes the best-selling duet in pop music history – that’s a tough act to follow. But almost 35 years later, John Travolta and Olivia Newton-John have combined their iconic voices for This Christmas, available November 13 from Universal Music Enterprises.

A true labor of love made specifically for “the giving season,” Travolta and Newton-John will donate the artist proceeds from the album equally to their respective charities, the Jett Travolta Foundation and the Olivia Newton-John Cancer and Wellness Centre in Melbourne, Australia.

One of the highlights of the album is the one original song, the aptly titled “I Think You Might Like It.” This is the sequel to John and Olivia’s Grease smash, “You’re the One That I Want,” a new tune by that song’s writer/producer John Farrar, marking yet another This Christmas-spawned reunion. “John Farrar was just as hard on me now as he was then,” laughs Travolta. “We went for perfection on it.” “It was really fun to do that,” says Olivia. “If it wasn’t for that song, we wouldn’t be here talking about it 30 years later.”

Produced by veteran keyboardist/arranger/orchestrator Randy Waldman, This Christmas is the audio equivalent of those classic network TV specials hosted from the stars’ homes, an intimate, warm set of traditional holiday songs from an all-star lineup that includes Barbra Streisand (“I’ll Be Home for Christmas”), Tony Bennett and the Count Basie Orchestra (“Winter Wonderland”), James Taylor (“Deck the Halls”), Chick Corea (“This Christmas”), Kenny G (“Rockin’ Around the Christmas Tree”), Cliff Richard (“Have Yourself a Merry Little Christmas”) and the original “I Think You Might Like It” by writer/producer John Farrar.

The idea for the collection came from Travolta after receiving a Christmastime text from his old friend Olivia noting that their 1978 smash, “You’re the One That I Want,” had just become the best-selling duet in pop music history. “From the moment we decided to do this, magic happened,” says Travolta. “Everyone we contacted agreed to do it.”

“It just fell into place,” added Newton-John, a four-time Grammy® winner, who has scored five No. 1 singles and two chart-topping albums, selling a total of more than 100 million albums worldwide. “With our busy schedules, I don’t know how we got it done. John and I have always connected. That’s never gone away. When we’re together, we have a good laugh and feel bonded to one another. We’ve been through some amazing experiences together.”

“My desire was to make This Christmas an intimate album, not something too ostentatious or showy,” says Travolta, who early in his career was featured as an actor/singer/dancer with the touring company of Grease. “I wanted people to be able to play it around the house or in the car during the holidays, and make us part of your celebration. Gathering around house listening to Christmas music has always been an important part of that time of the year to my family.”

But the real importance of This Christmas is the money it will raise to fund Travolta and Newton-John’s charities – one to combat children’s disabilities, including autism and seizures, named after John’s late son, Jett; the other to help search for a cure for cancer and to help victims of the disease.

“We all felt a wonderful, joyful energy while recording this album,” adds Olivia. “We want to make a lot of people smile and happy. It’s a project that we’re hoping turns into a perennial, one that can continue to raise money for these causes year after year, a gift that keeps on giving.”

Both of the superstars continue to thrive in their careers and personal lives.

Olivia is reportedly in talks to begin a residency in Las Vegas, and Travolta recently won in court against a frivolous lawsuit.