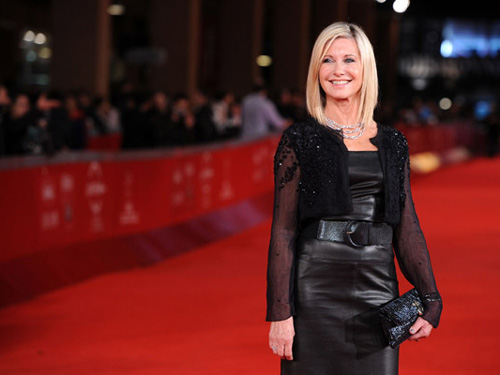 Translated from abc.es: The Australian actress Olivia Newton-John won the critical acclaim of the International Film Festival of Rome with her performance in the comedy “A Few Best Men”, where she plays a crazed mother-of-the-bride, fond of cocaine and alcohol, at the wedding of her daughter.

The Australian film, directed by Stephan Elliott, was presented out of competition this Friday and received applause from the audience after its screening on the third day of the event, which runs through Nov. 4.

Barbara (John Newton) is married to a wealthy Australian senator. After meeting the fiancé of his daughter Mia (Laura Brent), he instructs his wife to take charge of the ceremony to be held in a few days and which will be in the presence of Australian Parliament.

The groom (Xavier Samuel) of Mia, a Londoner who falls for the girl on a deserted island and decides to ask her to marry, returns to his hometown to report the news to his three best friends, who are responsible for turning the perfect wedding into a nest of problems and surreal situations.

“There is something crazy in this film and I wanted a change of scenery, so I seized the opportunity offered me Stephan Elliott,” Olivia said at a press conference, who was delighted with her new role.

However, she acknowledged that the character of Sandy in the musical “Grease”, with which gained fame for more than 23 years, will be with her forever.

“There are still many girls in the street who stop me and, obviously, none of them were born in 1978. I am very grateful to this character and I must say I deeply love Sandy” said the actress.

The Australian director, also present in Rome, joked about the famous film character “We wanted to kill “Sandy” and that’s why we have her character abusing drugs and alcohol,” he said.

Olivia Newton John explained that in those years, she starred in such films as “Grease” and “Xanadu,” starring roles suited to their age, and although she has a huge affection for them, she now looks for roles that are more serious, more suited to her age. “Although they have to be a little crazy,” he added with a laugh.