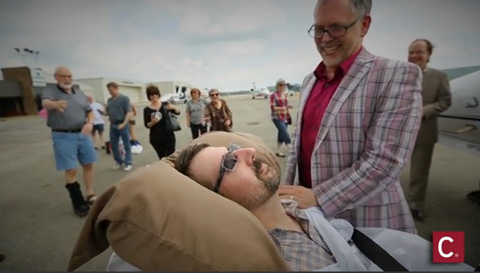 Two men who traveled from Cincinnati to Maryland last week to marry, John Arthur and Jim Obergefell,  are now asking Ohio to recognize their marriage based on equal protection:

The
suit points to an example of a marriage between first cousins. In Ohio,
it is illegal. But if first cousins go to another state and marry where
it is legal, Ohio will recognize their out of state marriage as valid.

“Equal
protection demands that opposite-sex couples and same-sex couples
should be treated the same,” Gerhardstein said in a release. “John and
James were validly married in Maryland. If they were an opposite sex
couple, Ohio would recognize their marriage. Being a same-sex couple is
no longer a good enough reason to deny them equal rights.”

Gerhardstein says the suit filed Friday has importance beyond the law. The couple is running out of time.

Two
years ago, Arthur was diagnosed with ALS, also referred to as Lou
Gehrig’s Disease. ALS is a progressive neurodegenerative disease that
affects nerve cells in the brain and the spinal cord. There is no known
cure or treatment today that halts or reverses ALS.