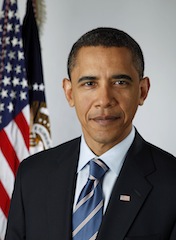 President Obama’s position on marriage equality during his time in public office has been fluid to say the least.

Last December, after passage of the repeal of the military’s “don’t ask, don’t tell” policy, he told The Advocate that his views on same-sex marriage were “evolving.”

At a fund-raising event in San Francisco Wednesday night, Obama spoke about how his work is not finished. He said it would take more than one term “for us to finish everything we need to do.”

As he was talking about the unfinished work left to do, someone shouted out, “gay marriage!”

Obama paused and then said – as if that person had just proved his point – “our work is not finished.”

I’m hoping this signals a bit more “evolution” on the part of the President.

Public polls – yes, more than one – are showing an ever increasing support for marriage equality in America. In a CNN/Opinion Research Corporation poll released Tuesday, 51 percent said they think marriages between lesbian and gay couples should be recognized as legal and come with the same rights as heterosexual unions. A recent ABC/Washington Post poll found that 53 percent of Americans said gay marriage should be legal.