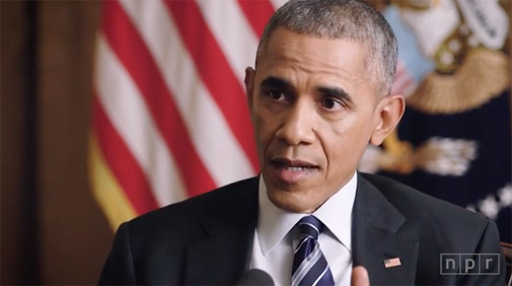 Speaking to NPR, President Barack Obama said that the U.S. will take action against Russia for cyber-hacking activity meant “to impact the integrity” of the 2016 presidential elections.

“I think there is no doubt that when any foreign government tries to impact the integrity of our elections that we need to take action,” the president told NPR. “And we will at a time and place of our own choosing.”

Without providing further specifics, the president said some U.S. actions may be “explicit and publicized” while others “may not be.”

The Obama administration has repeatedly condemned Russian hacks of American computer systems during the election, but Obama’s comments Thursday serve as the harshest public rebuke yet. White House press secretary Josh Earnest said Tuesday that the U.S. would deliver a “proportional” response to any Russian hacking.

The president also added that he had made his thoughts on the matter clear to Russian leader Vladimir Putin.

“Mr. Putin is well aware of my feelings about this, because I spoke to him directly about it,” Obama said.

The Kremlin denied reports Thursday that Putin had been “personally involved in the covert Russian campaign.” And on Friday, Russia’s foreign ministry spokesman called the U.S. accusations “unseemly.”