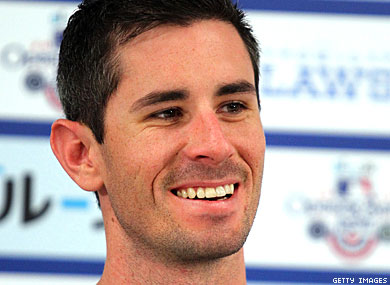 When the kiss cam shows two men they often
make faces of disgust, while the crowd erupts in laughter. The
28-year-old player recently tweeted, “They put two guys on the ‘Kiss
Cam’ tonight. What hilarity!! (by hilarity I mean offensive homophobia).
Enough with this stupid trend.”

McCarthy elaborated on his feelings to the San Francisco Chronicle.

“There’s
that stupid, little comedic value of it if you don’t really think about
what it implies,” he said Tuesday. “It kind of got old on that level.
Then I actually started thinking about why we were supposed to be
laughing, and it bugged me.”

It’s hypocritical for Major League
Baseball teams to film It Gets Better videos and continue with anti-gay
baiting via the kiss cam, McCarthy says.

“If there are gay people
who are coming to a game and seeing something like that, you can’t
assume they’re comfortable with it,” he said. “If you’re even making a
small group of people … feel like outcasts, then you’re going against
what makes your model successful.”
(source)