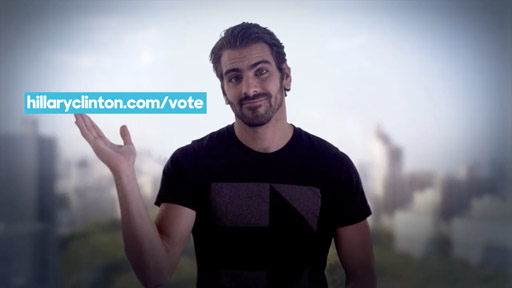 “The voice of your vote is the greatest voice we have.” —@NyleDiMarcohttps://t.co/tTgeqxNqYm pic.twitter.com/X3oqEoOYsU

“You can leave this ad muted — there’s nothing to hear. And keep scrolling past if you want, we’re used to being ignored. But if you’re still listening to my voice, please know that there are a lot of people out there without one. Among the 50 million Americans living with a disability, many don’t have the ability to work, to travel, or to do countless other things you might take for granted.”

“So this November, please consider voting for the only candidate with a plan to change that. Because the voice of your vote is the greatest voice we have.”

DiMarco came out as “sexually fluid” during his time on America’s Next Top Model.

He begins his next gig in Las Vegas this week as the “Celebrity Guest Host” for Chippendales at the Rio Hotel and Casino.