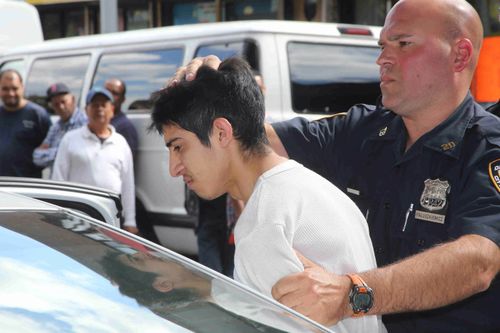 Steven Torres, a 22-year-old Bronx man, has been charged with second-degree murder as a hate crime for stabbing 69-year-old Edward Orozco of Queens to death under the elevated 7 train subway station at 90th and Roosevelt in Queens at 1:30 pm on Monday.

According to NY Daily News reports on what set Torres off:

“He (Torres) said the victim was blowing kisses to him. That’s what set him off,” a source said. “This is what he is claiming.”

Police say Torres tried to run from the scene before they apprehended him.  The assailant reportedly said nothing as he attacked his victim, but laughed when he was finally caught.

According to the NYPD, Torres has also been charged with the stabbing of a second man, which occurred on September 12th inside 9 Stanton Street near Bowery, because, reportedly, Torres believed that a 47 year old unidentified man was making sexual advances toward him. The second man survived the injuries.