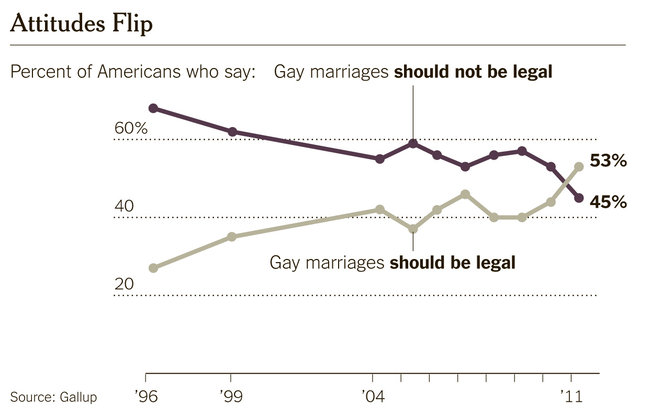 Excellent editorial in the New York Times today about the growing support for marriage equality.

In 1996, only 27% of Americans supported marriage equality in the United States. Today that stands at 53%, according to Gallup.

But there are even more promising facts in those numbers: support for same-sex marriage is now at 70% for Americans between the ages of 18-34.  The support from those aged 35-54 is now at 53%, the national average. The drop comes primarily among older voters 55 and older, falling to 39%.

In light of the generational gap in support, it’s clearly a matter of time before the United States not only has a majority of support for marriage equality, but a super-majority.  Here’s hoping the politicians elected to represent Americans take note, and decide on which side of history they want to stand.

There’s a lot of work to get to full equality though. Twenty-nine states have constitutional bans on same-sex marriage, and 18 of those states provide NO protections for gays and lesbians.

The New York Times editorial sums up the situation like this:

A repeal of the Defense of Marriage Act and changes in state laws could lead to expanded rights for gay couples in more states. But revoking those state constitutional bans would take years, if not decades. Until then, rank discrimination under law will persist.

The Supreme Court may soon have a chance to sweep away the injustice in several pending cases that challenge these laws. Just as it ruled unanimously in 1967 that laws barring interracial marriage violated due process and equal protection under the Constitution, it must affirm the civil rights of gay people.