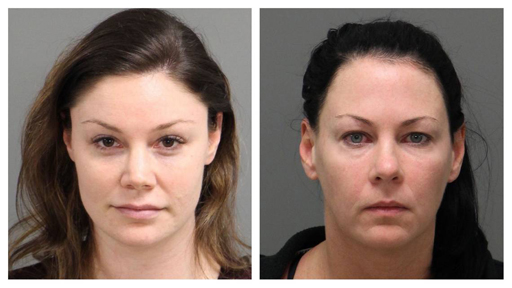 Two women have been charged with misdemeanor sexual battery and felony second-degree kidnapping after violently attacking a transgender woman in the ladies room of a downtown Raleigh bar.

According to the NewsObserver, Amber Nicole Harrell, 38, and Jessica Leann Fowler, 31, struck up what began as a ‘friendly conversation’ with the victim at Milk Bar on December 9.

But the women reportedly became violent and grabbed the trans woman’s genitals asking if she had a penis.

The assault was reported the next day by a friend of the victim who called 911.

A recording of the call, made public by the Raleigh Police Department, shows the two women started laughing as they pulled up the victim’s shirt in an attempt to see her breasts. They also grabbed the victim’s buttocks repeatedly as the victim told them to stop.

The assault continued after the three left the ladies room as the women openly groped the victim’s stomach and buttocks.

The bartender eventually told Fowler and Harrell to stop.

Harrell turned herself in to the police over the weekend and was released on $50,000 bail Monday morning.

Fowler turned herself in on Tuesday and is being held in the Wake County jail under a $30,000 bond.

In 2016, state lawmakers passed HB2, an anti-LGBTQ law which prohibited transgender people from using public bathrooms which aligned with their gender identity unless they had changed the gender listed on their birth certificate.

The law was repealed a year later but replaced with HB142, which still did not ensure trans people would have access to public restrooms. Additionally, the new law left prohibitions in place that bans any local communities from passing their own non-discrimination ordinances.