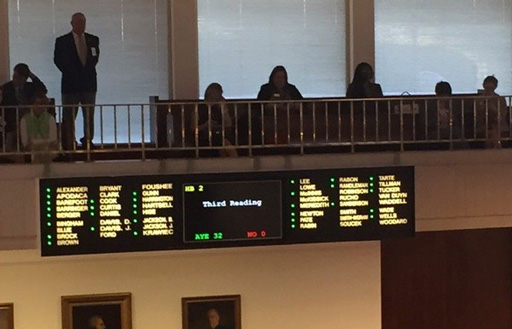 The North Carolina Senate voted unanimously, 32-0, to pass a bill approved by the House earlier today which bans all cities in the state from enacting LGBT nondiscrimination ordinances.

It also voids all current LGBT rights ordinances on the books in North Carolina, such as the recently passed measure in Charlotte.

The vote took place after all Democrats had left. All Republicans present voted yes.

The ACLU issued this statement:

The Charlotte ordinance protected lesbian, gay, bisexual and transgender residents from discrimination in public accommodations including restaurants, hotels, taxis and bathrooms. Among other protections, it allowed transgender men and transgender women to use the restroom that corresponds to their gender identity. HB2, which now goes to Governor Pat McCrory for his signature or veto, removes the ability of any local government to protect people from discrimination on the basis of sexual orientation or gender identity and requires all public facilities, including schools, to allow restroom access only on the basis of “biological sex.” It also jeopardizes the more than $4.5 billion in federal funding that North Carolina receives for secondary and post-secondary schools under Title IX, which prohibits sex discrimination, including discrimination against transgender students.

“Rather than expand nondiscrimination laws to protect all North Carolinians, the General Assembly instead spent $42,000 to rush through an extreme bill that undoes all local nondiscrimination laws and specifically excludes gay and transgender people from legal protections,” said Sarah Preston, acting Executive Director of the American Civil Liberties Union (ACLU) of North Carolina. “The manner in which legislators passed the most extreme anti-LGBT bill in the nation – voting hours after it was unveiled without adequate public debate – flies in the face of fairness and democracy. Legislators have gone out of their way to stigmatize and marginalize transgender North Carolinians by pushing ugly and fundamentally untrue stereotypes that are based on fear and ignorance and not supported by the experiences of more than 200 cities with these protections. Transgender men are men; transgender women are women. They deserve to use the appropriate restroom in peace, just like everyone else. We urge Governor McCrory to veto this extreme, far reaching and misguided bill.”

More than 200 cities, including Myrtle Beach and Columbia, South Carolina, have adopted nondiscrimination ordinances similar to Charlotte’s without negative consequences.

The Twitterverse has responded quickly:

This governor is so eager to sign the most anti-LGBT bill in the country that he’s going to do it tonight! #HB2 pic.twitter.com/EwjjqxAS0S

I assume the governor is acting fast to avert a corporate backlash shitstorm like in Indiana/Georgia — but assumes it can’t be retroactive.

By signing the bill banning ALL local LGBT rights ordinances, @PatMcCroryNC will make North Carolina the most anti-LGBT state in the nation.

In blocking the will of Charlotte and other cities, #NCGA is trampling on the rights of every taxpayer in North Carolina.

North Carolina, your lawmakers are a bunch of bigoted a-holes. https://t.co/MNAEBUagtD