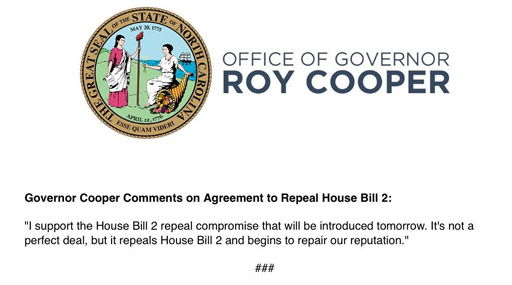 UPDATE: The legislation passed in the House 70-48. The bill now heads to the Governor’s desk to be signed into law.

Whether this actually satisfies the NCAA remains to be seen.

In a race to meet an NCAA deadline for consideration to host championship sporting events through 2022, the North Carolina legislature is ramming through a fake “repeal” of the state’s hateful anti-LGBT law, HB2. The “compromise” was concocted in a middle of the night/backroom deal between Phil Berger, the Senate leader, Tim Moore, the House speaker, and the new Democratic governor, Roy Cooper.

While being touted as a repeal, the new bill – HB142 – bans local municipalities from passing any non-discrimination ordinances through 2020.

“This law does not repeal HB2, it doubles down on discrimination,” said Cathryn Oakley HRC Senior Legislative Counsel at a press conference in Raleigh Thursday morning.

“If you vote for this bill you are not a friend of the LGBTQ community,” said Chris Sgro, Equality NC Executive Director.

What is particularly galling is newly installed Democratic Governor Roy Cooper, who campaigned on repealing the so-called “Bathroom bill,” is supporting this effort even as he admits it’s not “a perfect deal.”

The new bill passed the state Senate today by a vote of 32 to 16.

The legislation now moves to the state House.

From Chad Griffin, president of the Human Rights Campaign:

This “deal” does NOT repeal #HB2. It’s simply another version of HB2 dressed up in a way desperate lawmakers hope will save state’s economy.

This is bad, doubles down on discrimination and leaves LGBTQ unprotected @RoyCooperNC we will keep the pressure on – this is wrong. Fix this https://t.co/YS2FlcpLei

From the national office of the ACLU:

The #HB2 “repeal” deal isn’t a repeal at all. It will allow discrimination against LGBT ppl and it shouldn’t pass https://t.co/B5s8LtEX1b

Businesses in the state have begun chiming in as well. From Levi Strauss: