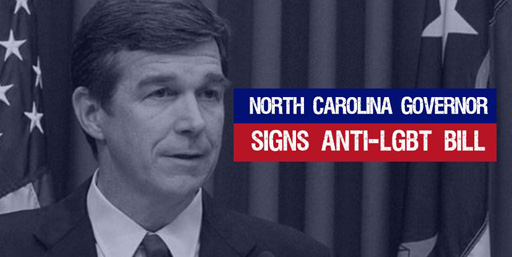 After rushing new legislation through both the state House and Senate of North Carolina, which was touted as a “repeal” of anti-LGBT law HB2,  Gov. Roy Cooper has signed HB142.

The Human Rights Campaign issued a statement which read, in part:

“After more than a year of inaction, today North Carolina lawmakers doubled-down on discrimination,” said HRC President Chad Griffin. “This new law does not repeal HB2. Instead, it institutes a statewide prohibition on equality by banning non-discrimination protections across North Carolina and fuels the flames of anti-transgender hate. Each and every lawmaker who supported this bill has betrayed the LGBTQ community. HRC will explore every legal action to combat this dangerous legislation, and we urge all businesses, sports leagues and entertainers who have fought against HB2 to continue standing strong with the LGBTQ community attacked by this hateful law.”

The legislation passed today would effectively ban LGBTQ non-discrimination protections statewide through 2020 and permanently bar cities from passing laws that ensure transgender people can access facilities in accordance with their identity. ”

This was all done to meet a deadline imposed by the NCAA, which had told the state of North Carolina to either repeal HB2 or lose any championship games for the next five years.

No word yet on whether or not this fake repeal will actually satisfy the NCAA.