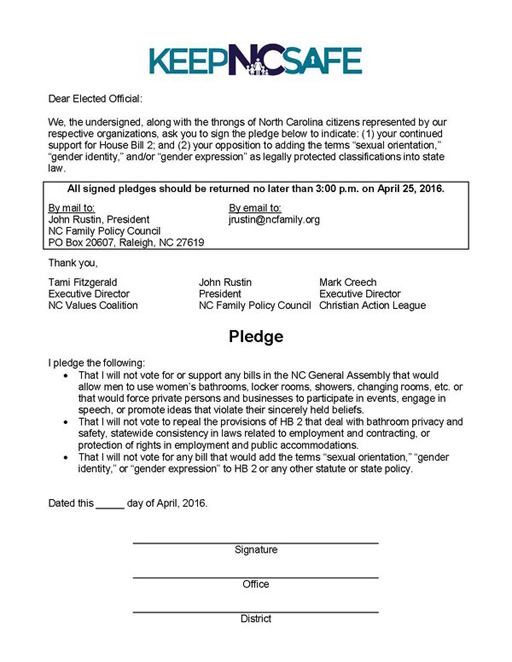 The haters in North Carolina say they have no animus towards the LGBT community.

Except, that is, when they want to force legislators to sign a “pledge” that no pro-LGBT protections will ever happen as long as the lawmakers are in office.

The folks over at anti-LGBT NC Family Policy Council began to circulate the above pledge designed to keep HB2, the new hate law in the state, in place.

But notice that third bullet point – “That I will not vote for any bill that would add the terms “sexual orientation,” “gender identity,” or “gender expression” to HB2 or any other statute or state policy.”

So, in reality, it’s not JUST about “protecting children” from bathroom predators. It’s about keeping the gays from having equal rights.

NC Capitol has the details on how the haters in NC backpedaled out of this mess:

John Rustin, president of the North Carolina Family Policy Council, sent the pledge to all members of the House and the Senate. By mid-afternoon Wednesday, he had emailed lawmakers, saying the pledge was circulated “inadvertently” and should be ignored.

“We had considered providing a means, prior to the convening of the 2016 Legislative Session, by which we could continue to encourage North Carolina lawmakers to stay strong in your leadership defending the privacy and safety of all North Carolinians, and clarifying that there is no patchwork of confusing local laws in the state that are harmful to commerce, labor, and trade,” Rustin said in the email. “However, we decided not to move forward with this pledge and respectfully ask that you disregard yesterday’s e-mail.”

State House Rep. Darren Jackson made sure the “pledge” was seen by the public:

Don’t believe HB 2 is all about discrimination? Check out last part of the pledge. #RepealHB2 pic.twitter.com/1Bdmlma0Qo