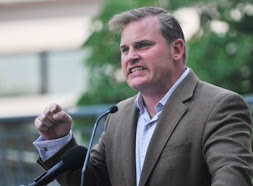 Hate group leader Brian Brown is already claiming victory in the SCOTUS marriage equality decisions due out tomorrow morning, according to the National Review:

“We’re thinking we’re going to win,” he told me. “And I think that even the other side realizes that they’re not going to get the decision they want.” He added that he thinks pro-same-sex marriage advocates got the timing all wrong, and that tomorrow will bring a huge victory for supporters of traditional marriage.

“This is like the life movement winning Roe,” he said. “This is the Roe decision for marriage. This is not trying to nibble at the edges; this is trying to claim that there is a Constitutional right to redefine marriage. If they lose that, then the highest court in the land will be saying one of their key arguments is wrong, and that will have a big, big, big impact.”