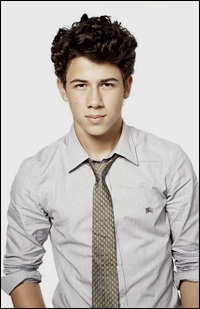 Pop star Nick Jonas, who started his Broadway career in the revival of Annie Get Your Gun, will return to the New York stage as J. Pierrepont Finch in the Tony Award-nominated revival of How to Succeed in Business Without Really Trying.

Primarily known as one of the Jonas Brothers, the hit band he formed with his two siblings in 2005, Nick Jonas made his West End stage debut as Marius in Les Miserables in 2010 and was recently seen in the Hollywood Bowl staging of Hairspray as Link Larkin.

Prior to his fame as a Disney Channel icon and as part of the Jonas Brothers, Nick Jonas appeared in the Broadway casts of Annie Get Your Gun, Beauty and the Beast and as Gavroche in the final Broadway cast (of the original run) of Les Miserables.

Jonas will take on the role of charming corporate chameleon Finch beginning Jan. 24, 2012, and continuing through July 1. He will succeed “Glee” star Darren Criss, who is scheduled to play a limited engagement in the revival Jan. 3-22, 2012. Tickets are now on sale for both replacements.
(via Playbill.com)