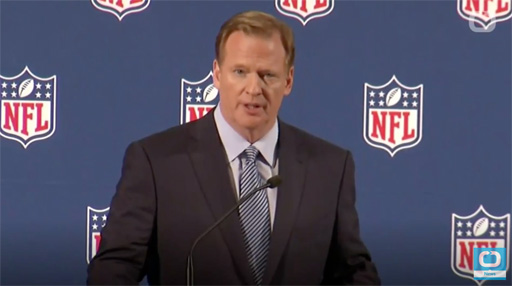 Donald Trump started a firestorm last night at a rally in Alabama when he attacked NFL football players who take a knee during the national anthem.

“Wouldn’t you love to see one of these NFL owners, when somebody disrespects our flag, to say, ‘Get that son of a b—- off the field right now. Out. He’s fired. He’s fired!”

The audience then chanted “USA!”

“You know, some owner’s going to do that,” Trump continued. “He’s going to say, ‘That guy who disrespects our flag, he’s fired.'”

He encouraged fans to walk out of stadiums if they see a player taking a knee in protest.

This is where I should probably point out that “taking a knee” is basically a First Amendment right. The U.S. Constitution protects free speech and freedom of expression.

Let’s see, where have we seen citizens forced to stand and swear allegiance to a flag/country that they don’t feel treats them with justice? Let me think, it’ll come to me… #Hitler #Nazis

NFL Commissioner Roger Goodell said Trump’s “divisive comments” were unacceptable, “showing an unfortunate lack of respect for the NFL, our great game and all of our players, and a failure to understand the overwhelming force for good our clubs and players represent in our communities.”

“This union…will never back down when it comes to protecting the constitutional rights of our players as citizens as well as their safety as men who compete in a game that exposes them to great risks,” said DeMaurice Smith, head of the NFL Players Association, via Twitter.

We will never back down. We no longer can afford to stick to sports. pic.twitter.com/Ec3Bc4qt9h

An entire island full of Americans in Puerto Rico are without power right now, and @POTUS is cursing out NFL players at his campaign rally.

Working people are hurting. Puerto Rico is underwater. The President is starting a flame war with an NBA player. Unbelievable. https://t.co/eLp2ccGyHN

But the best response to Trump’s rant came from Kaepernick’s mom: “Guess that makes me a proud bitch!”