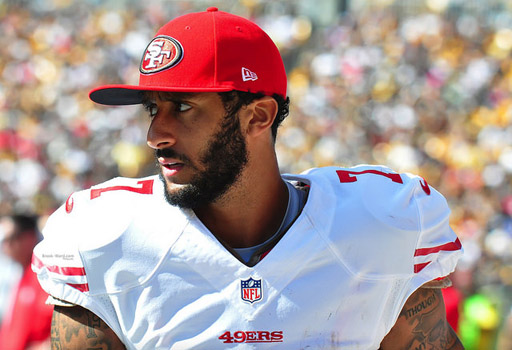 This week, the NFL announced new rules regarding players “taking a knee” during the national anthem at NFL games.

The new options are: Stay in the locker room until after the anthem, or come out and stand – no taking a knee in peaceful protest. Those who do will be fined according to the NFL.

The practice was begun by quarterback Colin Kaepernick to protest police brutality against African-Americans.

Donald Trump got involved and re-framed the issue saying the players are purposefully disrespecting the flag and anthem. He’s wrong.

Experts say the rule change is illegal because the league adopted its new policy without bargaining with the players union. When employees, including football players, are represented by a union, the employer — including a football league — can’t change the terms of employment without discussing the change with the union.

The folks at Buzzfeed put the owners’ statements alongside those of actual veterans who put their lives on the line for Americans to have the right to protest peacefully.

I’ll weigh in with this: this country was founded on the freedom to express ourselves in a peaceful manner. While some folks may buy Trump’s fake framing of the issue – that taking a knee is meant as a direct hit on our flag and anthem – the facts show it’s not the truth.

And, as you’ll see below, plenty of military veterans are open about the fact that they can love our flag AND support Americans exercising their constitutional right to peacefully protest.

“If you think I joined the #USNavy so NFL football players can kneel in protest of racial injustice, you would be correct. #TakeTheKnee” pic.twitter.com/Y31FwME7se