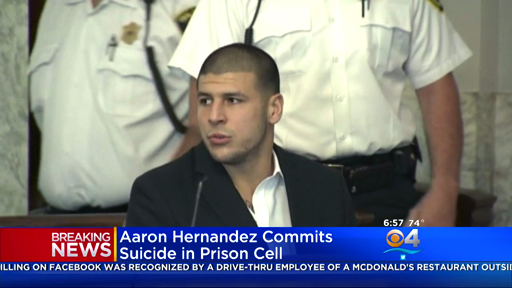 I’d seen reports earlier today about this theory, but ignored them thinking they were just salacious, tabloid tales.

But when Newsweek is reporting, you sit up and take notice.

He [Hernandez] was convicted in April 2015 for shooting and killing his friend, Odin Lloyd, seemingly without motive. But interviews with multiple law enforcement officials directly involved in the case say Lloyd—a semipro football player who was dating Hernandez’s fiance’s sister at the time—had information the football star did not want out: that he was bisexual.

One of the notes left by Hernandez was to his prison boyfriend, who is now on 24/7 suicide watch, multiple law enforcement sources confirm. Hernandez’s sexuality would, of course, not be relevant save for the fact that an intimate relationship he allegedly had with a male former high school classmate was at the center of the investigation into Lloyd’s murder.

Ernest Wallace, a co-defendant in the Lloyd murder case, told detectives the victim had called Hernandez a “schmoocher,” which was taken by Hernandez and his companions as a gay slur.

Wallace was also recorded saying during a jailhouse visit with Tanya Singleton, Hernandez’s cousin, that he would not have helped Hernandez get rid of the murder weapon—a crime for which he is now serving a 4½-to-7 year sentence on accessory to murder charges—if he had known Hernandez was a “limp wrist,” multiple sources say.