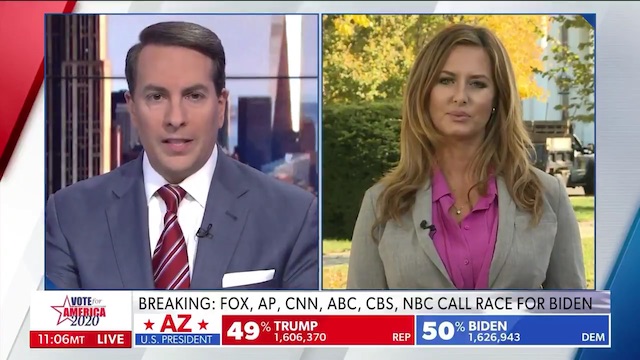 Reporting from the corner of Cynicism and Bitter…

A talking head at the far-right leaning streaming website Newsmax tried to insinuate all of the mainstream media (including Fox News Channel) colluded with the state of Pennsylvania to wait for Donald Trump to take his 284th trip to play golf before projecting former Vice President Joe Biden as the next president of the U.S.

“The timing on of all this, Emerald, certainly fascinates me. We talk a lot about media collusion with the Democratic Party and here we have the president just leaving the White House to go to his golf course to play a round of golf and he deserves to be able to do that.”

“We have the press conference that Rudy Giuliani is going to hold in Philadelphia happening. And at the very same time, all of all sudden, all of the networks, with the exception of Newsmax, decide that this is the time that they’re going to call the election. We are, here at Newsmax, not calling the election.”

Practically everyone with an interest in the election returns figured out the result would probably be announced today. Why would Trump even play golf today?

And then, of course, there’s the fact that Trump lied to the American people four years ago and said there “wouldn’t be time for golf” if he was elected in 2016.

It’s almost Shakespearean that Trump learned he lost the race on a golf course.

Newsmax anchor floats a conspiracy theory that the election was called to ruin Trump’s round of golf pic.twitter.com/q8dGEk22MV

newsmax is not taking this well pic.twitter.com/MnfmadaX07