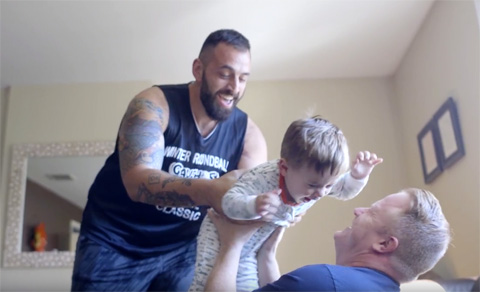 • Two minutes of smile – Feel good video about a typical day with woofy dads, Corey and Rocco, and their adorable son Forge.

• Regarding the “Kim Davis meeting Pope Francis” story – does it help to know he also met Mark Wahlberg? I’m guessing that doesn’t mean the Pope endorses the TED movies or the Funky Bunch.

• Rising star in the Indiana Republican Party, Rep. Jud McMillin, resigned from office after sexually explicit video was texted from his phone. McMillin was one of the co-sponsors of the state’s ill-received Religious Freedom Restoration Act.

• Donald Trump released his proposed revisal of the tax code which The Tax Foundation says would cost the U.S. $12 Trillion over ten years. No surprise – the wealthy would gain a LOT.

• Check out this most excellent mega-mix mashup of Madonna videos set to her new album Rebel Heart.