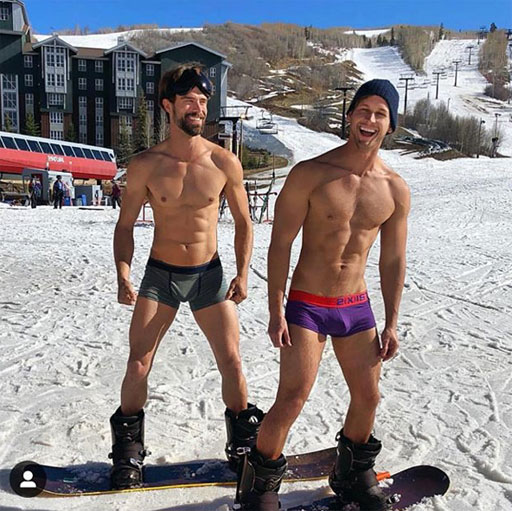 • What to do when a November storm dumps lots of snow on you? Go snowboarding! Someone might have told Max Emerson to take a few bits of clothing with him, but then – when you’ve got a Porsche, you don’t keep it in the garage.

• Tanzania just lost $10 million in aid from its second biggest donor, Denmark, thanks to the recent homophobic crackdown in the East African country.

• Hat tip to Kenneth-in-the-212 who found the ultimate ‘Hunk’ of House Hunters – Liev Schreiber – who, along with SNL’s Leslie Jones, totally spoof every cliche you’ve ever seen on the show. This is pretty funny.

• Gubernatorial hopeful Stacey Abrams has acknowledged she will not be able to close the gap between herself and her Republican opponent, former Secretary of State Brian Kemp. But, she did not concede the race saying Kemp had spent years working to suppress voters in Georgia in order to tilt the contest his way.

• A gay man in Miami says a Lyft driver spewed homophobic slurs at him during his ride before pulling a gun on him. The driver allegedly stopped the car and forcibly removed the man from the car, kicking him in the process and saying he wanted to “kill everyone who is gay.”

• I’ll be interviewing the oh-so-dashing and talented Mr. Norm Lewis about this his new holiday album soon, but for now … 🙂

View this post on Instagram
My Christmas Album will be available on November 27, 2018! #TheNORMLEWISChristmasAlbum #parumpumpumpum #NormLewis @playbill https://buff.ly/2RYsQA3
A post shared by Norm Lewis (@thenormlewis) on Nov 16, 2018 at 9:18am PST