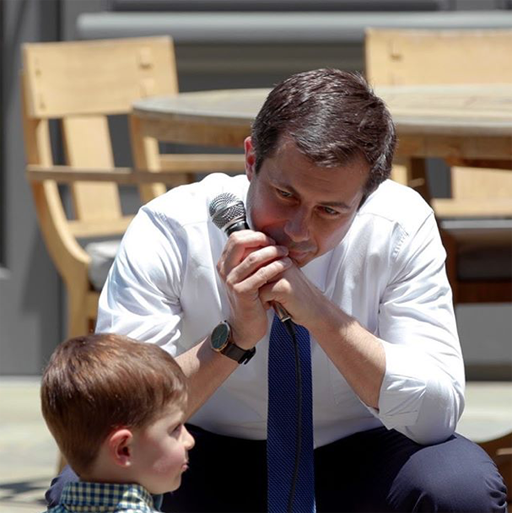 • I could not resist this adorable pic of Mayor Pete Buttigieg, who encountered this little guy out on the campaign trail. “Even the littlest voices deserve to be heard.”

• Speaker of the House Nancy Pelosi told Democratic leaders that she would rather see Donald Trump defeated for re-election in 2020 and face prosecution after he leaves office. “I don’t want to see him impeached, I want to see him in prison.”

• Four U.S. Special Operations troops charged in the death of a Green Beret soldier in Mali plotted to record him being sexually assaulted as part of a plan to embarrass him through hazing.

• After two years of harassing Vox reporter Carlos Maza on YouTube for being gay and Latino – we’re talking hundreds of troll comments, doxing Maza and more – the video site finally took some action towards YouTuber Steven Crowder by ‘demonetizing’ his channels.

They didn’t stop the hater from posting his homophobic campaign against Maza, but at least he can’t make any money from it. (p.s. Maza wasn’t happy with the penalty)

Abusers use it as proof they’re being “discriminated” against. Then they make millions off of selling merch, doing speaking gigs, and getting their followers to support them on Patreon.

The ad revenue isn’t the problem. It’s the platform.

The problem is that @YouTube allows monsters and bullies to become superstars, break YouTube’s rules, build an army of loyal, radicalized followers, and then make millions selling them merch that sustains their work.