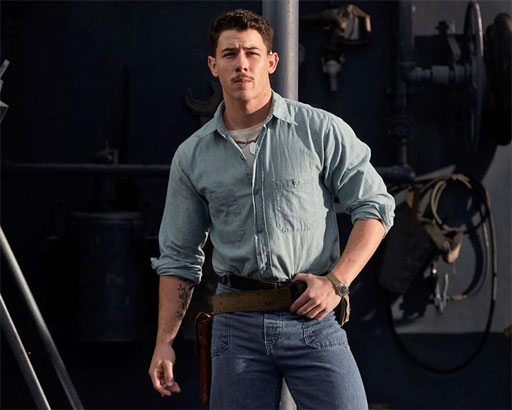 • Nick Jonas is giving you seriously ‘daddy’ grown-up goodness in this promo pic introducing his character “Bruno Gaido” from his upcoming movie, Midway, due out November 8. #Dang

• A gay couple were the target of homophobic insults before being spat on, clawed and physically attacked in an unprovoked attack in Essex in southeast England.

• Senate Democrats have introduced a resolution recognizing the 50th Anniversary of the Stonewall uprising, the first time Congress has formally acknowledged the event that led to the modern LGBTQ rights movement.

• Alphonso David has been named the next president of the Human Rights Campaign. He is the first civil rights lawyer and the first person of color to lead the LGBTQ advocacy organization.

BREAKING: Alphonso David has been named the next president of the Human Rights Campaign! David will be the first civil rights lawyer and the first person of color to lead @HRC. #AlphonsoDavid pic.twitter.com/GgiFQBtUVP

• Prince William says it would be “absolutely fine” if one of his children came out as gay.

• Deadline reports that Oscar winners Meryl Streep and Nicole Kidman, along with James Corden, Andrew Rannells, and Keegan-Michael Key, have all been tapped by Ryan Murphy for the Netflix adaptation of the LGBTQ-themed Broadway musical, The Prom.

• As WorldPride gets underway in New York City today, just a reminder of how a leader CAN relate to his LGBTQ constituents. Folks, I give you Canadian Prime Minister Justin Trudeau at Toronto’s Pride event this past weekend.

Justin Trudeau joined the Toronto #Pride parade this past weekend, and it was rather adorable! 🏳️‍🌈 pic.twitter.com/lnvppOz7s0