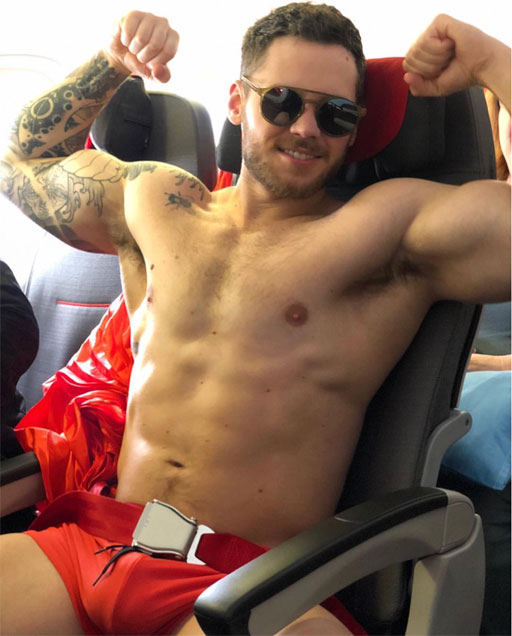 • As I board my plane to head home to Las Vegas from the fab Puerto Vallarta, let me inform you no one on my flight looks quite like Matt Camp (above), who I just chatted with for an upcoming interview.

• Michelle Obama has added EVEN MORE dates to her book tour as sales of her memoir, Becoming, have already exceeded 3 million copies in North America alone.

• Conservative Washington Post columnist Jennifer Rubin has a VERY interesting idea Donald Trump might use to stay out of jail if not re-elected.

• A Florida man has been sentenced to 3 years in prison for hooking up with straight men, telling them he was a woman, promising blindfolded anonymous sex and then filming them without their knowledge or consent.

• Yale Law School librarian Fred Shapiro has issued his annual list of the year’s most memorable quotes. Topping the list is Rudy Giuliano’s “Truth isn’t truth” quote from his interview on “Meet the Press,” August 19, 2018.

• Jim Marchese, who no one remembers from the 2014 season of The Real Housewives of New Jersey, is attempting to become relevant in some way via his blatant homophobia on social media telling his Twitter followers, “NO STRAIGHT MALE wants his son to be gay.”

So true NO STRAIGHT MALE wants his son to be gay. A gay son is a curse that takes away your #family traditions #heritage #lgtbiq is a a parents nightmare that destroys families. Ruins holidays like #Christmas #KevinHart we support you! #LiberalismIsAMentalDisorder https://t.co/nuoTLLwQu6

He doubled down with even more homophobia:

For those pushing #LGTBIQ agenda show me a single credible study which links genetics. Being gay is a physical act derived in sexual deviance by definition. No one is born gay it is a lifestyle choice like being vegan. Get over it. You are #FakeNews