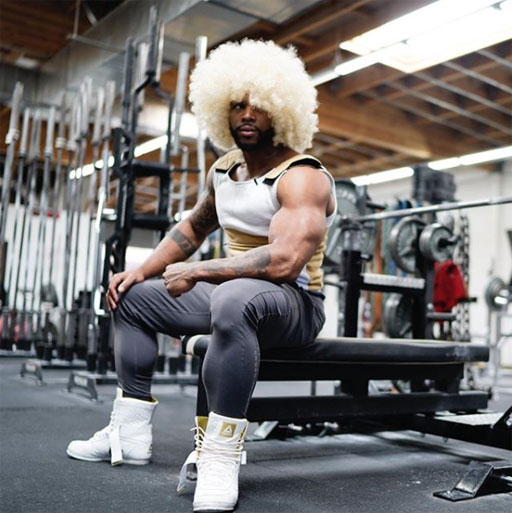 • InstaHunks: Terron Beckham (above), the ridiculously jacked cousin of the Cleveland Browns’ Odell Beckham Jr., shows off some gym humor along with his ‘big-is-best’ everything else. #thosecalves

• OUT: A new study shows some men may be reticent to recycle because it might be perceived as ‘feminine.’

• Variety: At her Madison Square Gardens concert over the weekend, Barbra Streisand offered up a tweaked version of “Send in the Clowns” that trolled the current clown in the Oval Office.

• Twitter: A police officer busts some moves to Steps’ 2017 hit “Scared Of The Dark” while attending Brighton Pride in the UK. The clip went viral after his police department shared the clip on social media.

• Red Flag Bill: Sen. Lindsey Graham (R-SC) is collaborating on a “red flag” bill with Sen. Richard Blumenthal (D-Conn.) that would start a federal grant program to help encourage states to create “‘red flag’ protection order” laws, which are meant to make it easier for law enforcement to identify mentally ill people who should be banned from purchasing guns.

• NY Magazine: A new profile on Ivanka Trump quotes a friend who says the Trumpette, “Has no idea she’s privileged. She genuinely thinks she’s earned everything she has. She goes on and on all the time about how hard she works.”

• Out Music: Make-up artist Deney Adam (whose work has been seen in Vogue, NY Times, Interview) puts down his brushes to drop his wild and wooly new track and music video, “Heartdrop.”

The visual, directed by the fab Mike Ruiz, is a fast and furious, animalistic affair featuring a nearly naked Deney locked inside a glass case.

“I wanted to convey that feeling of being trapped in a situation; when just at the moment that you think you are finally free from it, you find yourself right back where you started,” says Deney.

Musically, the track continually switches gears resulting in a visceral, heart-pounding (or should that be ‘heart-dropping?’) ride. Hit play below.