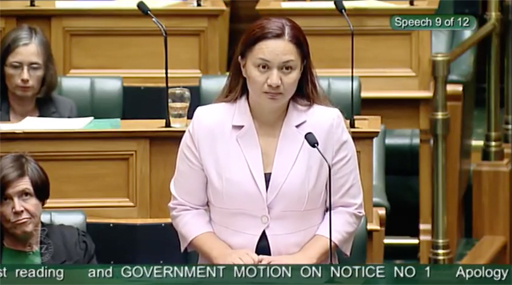 A powerful and moving speech by Green MP Marama Davidson at the New Zealand Parliament, which is considering legislation that would pardon gay men convicted of homosexual behavior.

Davidson shares an emotional, personal example of the impact on her family of homophobia, remembering a young gay man who was killed by Davidson’s uncle in the 1980s.

From the New Zealand Herald:

Her voice breaking, Marama spoke of the man during Parliament’s formal apology to the men convicted for consensual acts at a time homosexuality was illegal.

“I want to acknowledge in particular a young man who was murdered for being gay when I was a young girl … I think about what he lost in his life.

“I send my love to his family because the person who stole his life was my family.”

Davidson later explained that in the 80s, her uncle had reacted violently when propositioned by a gay man. Her uncle punched the man, who ended up in the water on Wellington’s waterfront and drowned.

The uncle was convicted of manslaughter and was killed in prison himself.

The bill of apology passed unanimously in New Zealand’s Parliament. The legislation would allow about 1,000 men with convictions for homosexuality to apply for pardons. The families of men who have passed away would be able to apply on their behalf.

Watch MP Davidson speak below. She references her personal connection to the legislation at the 1:30 mark.