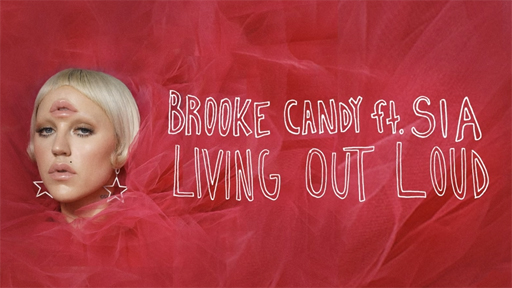 Just in time for the weekend!

Speaking to Noisey last March, Candy shared, “The new record we’ve been working on together has a strong message, but the sound is more polished. I’ve been describing it as thoughtful pop, like Luscious Jackson meets Smashing Pumpkins meets Madonna. The melodies are clean and bubbly, but the message is real. I want to make music that makes people feel some sort of bliss. That makes people want to spread some sort of love and light onto this planet because I think we’re in a sort of dark age and the planet really needs it.”

Both artists have been open about their past troubles with substance abuse, and they put the issue front and center with “Living Out Loud:”

Twenty-four hours it’s a day at a time
Twenty-three lived a hell of a life
Twenty-two such a blur, it’s passing me by
Twenty-one I caught a glimpse of the light
Twenty drinks later in the back of a ride
Nineteen momma kicked me outta the house
Eighteen minutes ’till you bail me out
Seventeen magazine was telling the truth
When they said we all have issues

“Living Out Loud” is the first official single from Brooke’s upcoming debut album Daddy Issues which is set for release spring 2017.