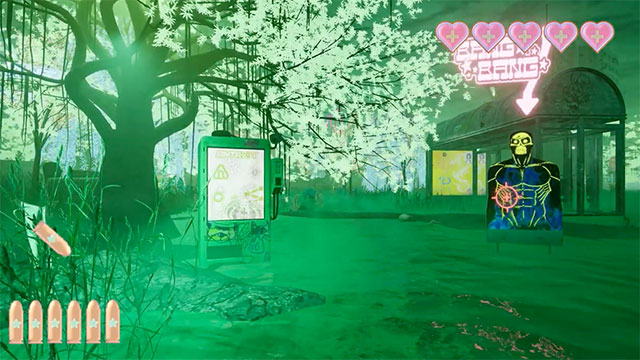 Check out the second music video released posthumously for the late Harry Hains (most noted for American Horror Story and The OA), an eerie, pop-synth re-imagining of the classic Nancy Sinatra song, “Bang Bang (My Baby Shot Me Down).”

Created by Harry’s brother, 3D artist and designer Sam Hains, the video is set against the backdrop of glitchy computer game-style production and dubstep skittering drums. Viewers are transported into a video game utopia where art, music, and gaming converge.

Harry, who was gender fluid, tragically lost his battle with drug addiction earlier this year.

Through the prism of his artistic alter-ego, ANTIBOY, the genderless transhuman, Hains imagined a digital utopia where there is no inequality, prejudice, or toxicity.

This is Hains’s second track from the forthcoming concept album A Glitch in Paradise out next month. I previously covered the first single, “Good Enough,” here.

An amalgamation of rock, electronica and gothic pop, A Glitch In Paradise explores the virtual world of ANTIBOY as he re-lives his mistakes in order to try to correct them and find happiness. But ANTIBOY experiences glitches and gets stuck in an endless loop of heartache, inspired by Harry’s relationship with then-partner Mike.