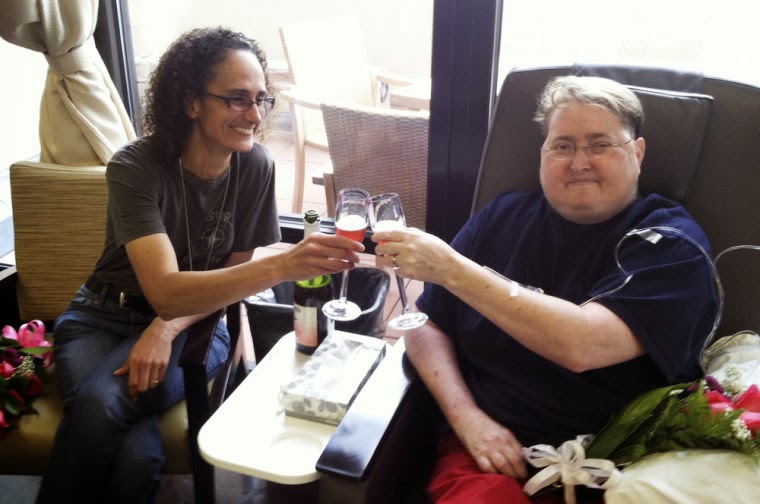 Jen and Angelique Neuman-Roper were one of the six couples suing the state of New Mexico for the right to marry.

On August 21, a judge ordered a county clerk to issue their marriage license.

Jen Neuman-Roper died this past Friday due to her advanced brain cancer:

Jen and Angelique Neuman-Roper of Nambe were married in August during an impromptu ceremony in the lobby of the Christus St. Vincent Cancer Center in Santa Fe, the same day a judge granted their request and ordered the Santa Fe County clerk to begin issuing marriage licenses to same-sex couples. They made their urgent request because Jen Neuman-Roper had Stage 4 glioblastoma, an aggressive form of brain cancer.

They married again in October, this time in a more formal ceremony in Pojoaque attended by many family and friends.

Upon her passing, Jen Neuman-Roper was the first person to be issued a New Mexico certificate of death that acknowledged a surviving same-sex spouse, according to a news release issued today by the American Civil Liberties Union of New Mexico.

ACLU-NM Executive Director Peter Simonson issued a statement which reads in part, “She was a beloved member of her community, a loving mother and wife, and a trail blazer for marriage equality in New Mexico. Her participation in the New Mexico freedom to marry case helped open the door for thousands of same-sex couples to celebrate their love and commitment in marriage here in our state. She will be missed.”