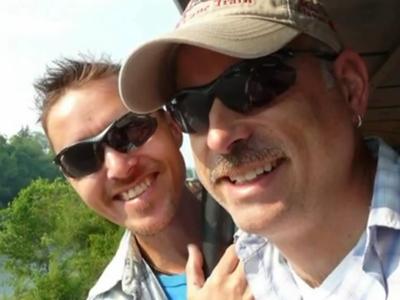 The Advocate reports that Ron McCoy and his partner Chris Bowers flew into Albuquerque International Sunport on June 28. They were planning to attend Albuquerque’s Pride festival that weekend, then kick off a road trip of the Southwest, according to Albuquerque’s KQRE.

But when the couple boarded an airport shuttle to pick up their rental car, they say they sat down toward the front of the bus and took one another’s hand.

“I saw him look at us, look down at his hands, and he looked so angry,” McCoy told KQRE. “He just blurted out at me, he goes, OK, if you’re going to do that, you’re going to the back of the bus.”

Flabergasted by the driver’s tone, the couple complied and moved to the back of the bus. But when the shuttle stop, the couple approached the driver to inquire about why he demanded they move.

KQRE spoke with a woman who witnessed the exchange, and said she was appalled by the driver’s behavior.

A spokesman for the airport confirmed that the driver had acted inappropriately, and called the driver’s behavior “absolutely unacceptable.”

UPDATE: The shuttle service company has apologized for the actions of its driver.

Standard Parking Inc. has stated that it has a zero tolerance policy toward discrimination and suspended the employee after learning of the June incident, reports the Associated Press. It also stressed its commitment to its customers’ equal rights.

Gay couple forced to back of bus