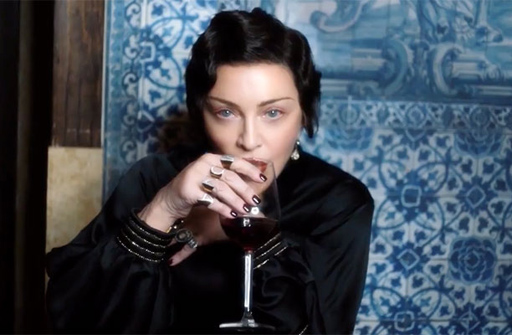 The 23-minute film shares how the Queen of Pop was given the nickname ‘Madame X’ when she was 19-year-old and a new transplant to New York City.

Madge also explains how her new album, Madame X, which recently debuted at number one on the Billboard 200 chart, came to fruition while living in Lisbon, Portugal.

Living in Lisbon, Madonna shares she was happy to be there for her son, who wanted to train for soccer.

But, she also says she became “lonely” as she didn’t really know anyone there, much like when she first moved to New York City. “I knew that I had to find my tribe, so to speak,” she adds.

Along the way, she developed a friendship with Dino d’Santiago, a Portuguese singer, who invited her to living-room music sessions, where local singers and instrumentalists gather in someone’s home to play music.

After recording several of the living room jam sessions, Madonna felt she had to “take what I’m hearing, and turn it upside down.”

She sent clips to her longtime producer, Mirwais, writing, “I know this is crazy, but tell me if it inspires you. Let’s chop up the guitar sounds, and synch them to modern sounding drums.”

According to Madge, a week later he had sent back his musical interpretations of the clips, which she described as “amazing,” adding that the new tracks left her “super inspired.”

As she continued “meeting musicians from all these places,” she allowed their work to influence her. And that, as Madonna says, is “how these songs came to be.”

“I had landed in a magical world,” says Madonna in the new documentary-short.

You can check out a 3 minute clip from the documentary below, and find the full short film on Amazon Video here.

There are also two, brand-new Amazon Original remixes of tracks from Madonna’s new album from Robbie Rivera and Erick Morillo.

Madonna is currently prepping for a series of rare, intimate concerts that will be held exclusively in theaters. The best-selling female solo touring artist of all time, her tour begins September 12 in New York City. For more info about the upcoming concerts, click here.

View this post on Instagram
Madame ❌ explains what inspired the song Killers Who are Partying……………… 🎼🌎🎼🌍🎼🌏🎼 …………..Watch the new documentary exclusively on @amazonprimevideo and listen to the new album on @AmazonMusic @nunoxico @stevenkleinstudio #madamex #killerswhoarepartying #worldofmadamex
A post shared by Madonna (@madonna) on Jul 5, 2019 at 2:02pm PDT