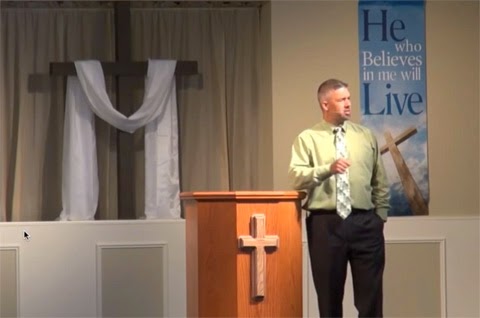 This story begs the question: “What would Jesus do?”

As the pastor of Bible Baptist Church explains, when a young man didn’t take the Lord seriously enough, he decided to convert the man by punching him as hard as he could.

Pastor Eric Dammann begins by saying that he met a young man in Calgary named “Ben,” who was “a nice kid, but one of those — he was a real smart aleck. He was a bright kid, which didn’t help things — made him more dangerous.”

“We were outside one day at youth group,” Dammann continues, “and he was just trying to push my buttons. He was just kind of not taking the Lord serious [sic].”

“So I walked over to him and went BAM! Punched him in the chest as hard as I could. I crumpled the kid. I just crumpled him.”

“Then I leaned over and said, ‘Ben, when are you going to stop playing games with God?’ I led that man to the Lord right there,” he concludes.

The good pastor admits the kid was a “smart kid, which made him more dangerous.”