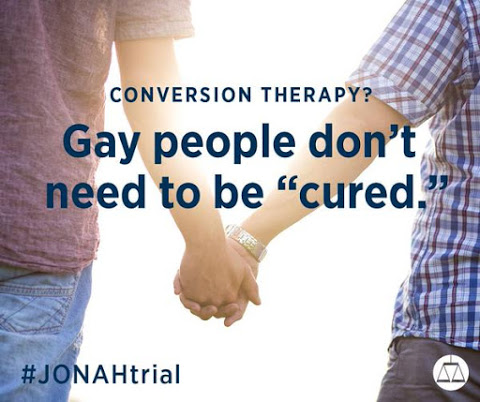 A New Jersey jury found a “life coach” and a non-profit group called JONAH guilty of consumer fraud in the first court case in the country to address the practice of so-called “ex-gay” or “conversion” therapy.

The jury concluded that Arthur Goldberg and Elaine Berk, the founders of Jews Offering New Alternatives for Healing in Jersey City and life coach Alan Downing to whom JONAH referred patients, “engaged in unconscionable commercial practices” and misrepresented their services.

The verdict requires JONAH and Downing to refund thousands of dollars paid by former clients Michael Ferguson, Benjamin Unger, Sheldon Bruck, Chaim Levin, and parents Jo Bruck and Bella Levin for the individual and group counseling sessions and the “journey into manhood” weekends in the woods.

But the victory has broader implications. The national civil rights legal advocacy group Southern Poverty Law Center filed the case to take a stand against conversion therapy — a frequent target of public criticism since the passage of same-sex marriage laws and other LGBT legal protections.

In 2013, New Jersey joined California by outlawing licensed therapists from providing the therapy to minors. Oregon and Washington D.C. followed.

The “therapy” included such activities as beating a pillow with a tennis racket as if the pillow were the patient’s mother; undressing in front of the practitioners; and touching themselves to express their “manhood.”