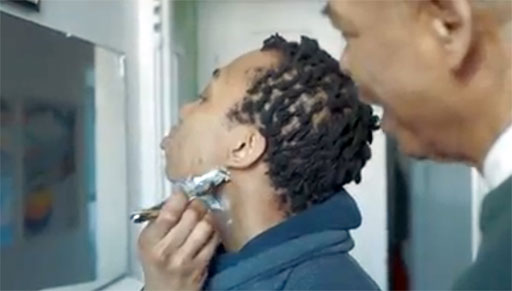 Gillette’s latest  ad spot features a dad coaching his transgender son on his first shave as part of its #MyBestSelf campaign.

Titled,“First Shave,” the spot features Samson Bonkeabantu Brown, a young trans man, shaving his face for the first time as his father offers tips and encouragement.

The ad’s tagline reads, “Whenever, wherever, however it happens—your first shave is special.”

“Don’t be scared,” Brown’s father tells him as he handles the razor. “Shaving is about being confident.”

“I shot this ad for Gillette and wanted to include my father, who has been one of my greatest supporters throughout my transition, encouraging me to be confident and live authentically as my best self,” Brown shared on Gillette’s Facebook page.

“I am confident that this ad will encourage many of my trans siblings and fill them with the knowledge that our existence in this world can be filled with the love and support we deserve.”

Gillette also released an ad recently that addressed the issue of toxic masculinity.

Check out the new spot below.