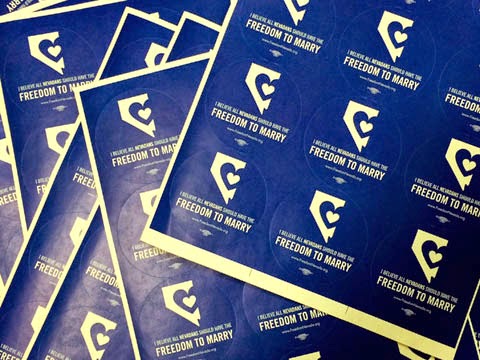 Last night I attended a  “Send Off” event here in Las Vegas for the plaintiffs in Nevada’s same-sex marriage appeal to be heard in the 9th Circuit Court of Appeals in San Francisco Monday.

Freedom To Marry‘s Thomas Wheatley moderated the event meant to catch the Las Vegas LGBT community up to date on how Nevada got to this point in the marriage equality timeline.  Lawyers Peter Renn from Lambda Legal and Marek Bute & Kelly Dove of Snell & Wilmer provided facts, figures and their thoughts on the outcome of the 9th Circuit appeal.

Clearly the team and plaintiffs are very upbeat about the case.  The energy in the room was relaxed, confident and positive.  No lawyer-esque kind of false posturing.

Peter Renn recapped the history of the case and explained that even though the plaintiffs lost in 2012, he considered the ruling at the time an outlier that is even more antiquated today in light of over 30 rulings in favor of marriage equality across the country. That thinking was that if same-sex marriage were allowed, heterosexual couples would cease to marry because the union had been “devalued.” As we all know, that reasoning has lost over and over again.

Megan Lanz, when asked why she chose to be a part of this lawsuit said, “I wanted to speak up for what’s right. I want to be a good example for our daughter, and to represent others who may feel they don’t have a voice.”

Snell & Wilmer’s Kelly Dove explained the legal team’s satisfaction with the three judges selected for the 9th Circuit panel and recapped their past rulings which would seem to bode well for the LGBT community.

Of the three judges, Judge Reinhardt has the richest history of the three when it comes to LGBT cases. Reinhardt wrote the 2012 opinion that upheld district judge Vaughn Walker’s ruling that found California’s Proposition 8 unconstitutional. And, he also wrote the opinion in SmithKline Beecham v. Abbott Labs which ruled that discrimination against LGBT people is subject to heightened scrutiny.

Judge Berzon joined with Reinhardt on the SmithKline ruling. Plus, her court history shows a progressive bent in her rulings.

So, the panel looks fairly positive for the plaintiffs.

The legal team did note that since the governor of Nevada and the Attorney General have both decided not to defend the marriage ban, only the Coalition for the Protection of Marriage (who initiated the ban in the first place) are the only opposition to the appeal.

Referencing Hollingsworth v. Perry, where SCOTUS ruled that backers of a ballot measure did not have a legal right to be in court to defend the proposition, Dove expressed confidence that if the ban is struck down at the 9th Circuit, no appeal can be made by the Coalition due to lack of standing, and marriage equality could come to Nevada fairly quickly.

Also attending was legendary LGBT activist Cleve Jones, who expressed his thanks to the plaintiffs for coming forward and working through the lengthy life disruption to raise their voices for so many gay and lesbian couples in Nevada.

And with that, we look to Monday and the oral arguments that will be held at 1pm. The hearings will be streamed and you can watch by going to www.ca9.uscourts.gov and click on the link under the beige-colored bar labeled “Live Oral Arguments.”