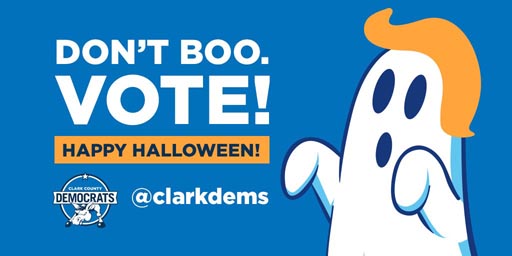 As of this Halloween morning, registered Democratic voters showing up at the polls lead registered Republicans by 34,186, according to the Nevada Secretary of State website.

Washoe County, considered a bellwether, shows Dems with 2,500 lead, which is almost twice what it was in 2012.

Dems are up 15 points in Clark (it was 16 in 2012), which is a point above registration, and that firewall is going to get to 60,000-plus, unless something strange happens. I repeat: Trump appears to have no path here, but the Senate race is not quite over yet.

Statewide turnout is now 31 percent of all voters — Democrats are at 34.6 percent, Republicans at 33.9 percent and others at 23 percent. The Republicans actually have a slight turnout lead in Clark — 34.9 percent to 34.3 percent, showing why that 142,000 Democratic registration lead matters. The Democratic turnout edge in Washoe is nearly 4 points (37-33).