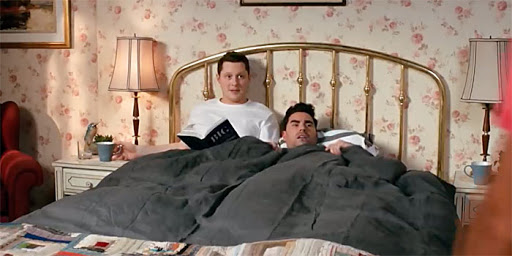 We’re so excited for the new trailer for the upcoming 5th season of the Netflix series Schitt’s Creek.

In case you haven’t been watching the show (and you really should be), the series follows the Rose family, a formerly wealthy family (video store magnate Johnny and soap opera star wife Moira) who find they’re almost broke after an employee embezzles their money.

The only asset they are left with turns out to be ownership of a small town, named Schitt’s Creek, Johnny bought years ago as a joke.

The Roses are forced to relocate to the small town with their two spoiled children, daughter Alexis and uber-gay son David, leaving their pampered, wealthy lives behind.

Speaking to the Toronto Star, Dan (who’s openly gay) shared that the fan base for the series is very wide ranging – from seniors to teens, from Democrats to Republicans.

In fact, he says “some of the most touching feedback” has come from conservative, religious viewers who’ve never “understood” the LGBTQ community.

They’d never had an in to that world before, and they’ve fallen in love with the characters,” says Dan. “If we can continue to open people’s eyes to realize that everyone’s deserving of love, that’s a wonderful thing.”

He also celebrates the creative freedom he and the show’s creative staff has enjoyed in exploring gay storylines.

From The Toronto Star:

“As a gay person to tell these stories and to have no questions asked and no notes from network and to feel completely uninhibited in saying, ‘This is a gay couple on TV; they’re going to kiss like any straight couple would” — it’s amazing.

“Gay relationships have historically not been treated the same as straight relationships. You don’t see the same kind of sexuality, intimacy, kissing, because it’s been considered taboo or headline-grabbing for so long. I love that we’ve been able to just tell a relationship as it is, as it exists, for me, for my friends, for people I know, for people out in the world, that doesn’t come with a lesson to be learned. It’s just two people loving each other.”

Calling the show’s 4th season a “midpoint,” Levy feels the series has a “whole half a football field to go” in exploring Schitt’s Creek’s characters.

Season 5 of Schitt’s Creek drops on Netflix January 16. Watch the trailer below.