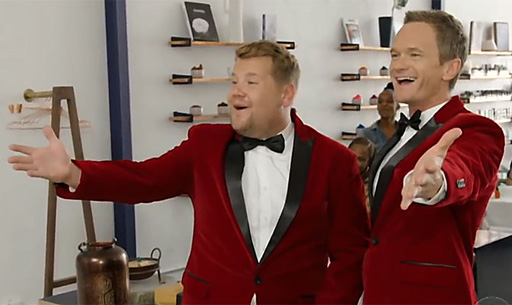 In the first of three performances, the dashing duo (adorned in red velvet tuxedoes) drop by a boxing gym to serenade a couple for their 19th wedding anniversary to the tune of Olivia Newton-John’s classic, “Physical.”

However, the tune got a change up for the moment resulting in lyrics like, “Anniversary, versary, it’s your anniversary, 19th anniversary!” while hunky boxers looked on.

Next up the musical men hit up a nail salon to sing in honor of a hot wax technician’s birthday via Elton John’s “Tiny Dancer,” albeit with new words:

Blue jean baby, LA lady, she works at the salon,
She’s given millions of good Brazilians, all those tiny hairs are gone

Unfortunately, there is a slight snag as the boys seem to have gotten their intel wrong and it’s not the woman’s birthday. #SadTromboneSound

And finally, there’s a performance to celebrate the adoption of a cat. There’s a small squabble about wearing cat ears, but you know how that turns out.

Launching into an altered version of “Memory” from the Broadway hit CATS, the twosome do their best with pawing movements, tail flicks and more, although the day’s tension seem to be wearing on the duo.

As he exits, Corden is asked to adopt a cat of his own but drops a truth bomb, “I hate cats.”

And the boys call it a day.