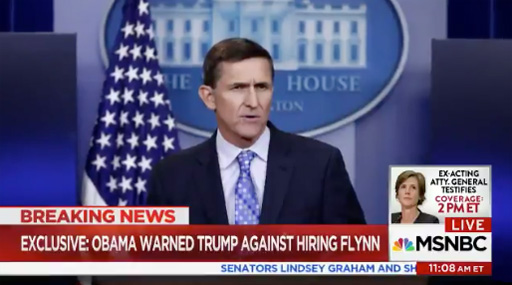 The warning, which has not been previously reported, came less than 48 hours after the November election when the two sat down for a 90-minute conversation in the Oval Office.

The revelation comes on a day that former acting Attorney General Sally Yates is expected to testify that Flynn misled the White House about his contacts with Russia’s ambassador to the United States.

NBC News has asked the Trump administration for a response.

According to all three former officials, Obama warned Trump against hiring Flynn. The Obama administration fired Flynn in 2014 from his position as head of the Defense Intelligence Agency, largely because of mismanagement and temperament issues.

Obama’s warning pre-dated the concerns inside the government about Flynn’s contacts with the Russian ambassador, one of the officials said. Obama passed along a general caution that he believed Flynn was not suitable for such a high level post, the official added.

Trump named Flynn as his national security adviser. Flynn, who was conducting private conversations with the Russian ambassador regarding sanctions, was then fired three weeks into the administration for misleading Vice President Pence about those conversations.

This morning, Trump sent out a tweet trying to deflect his own bad judgement in hiring Flynn, even after being warned.

General Flynn was given the highest security clearance by the Obama Administration – but the Fake News seldom likes talking about that.