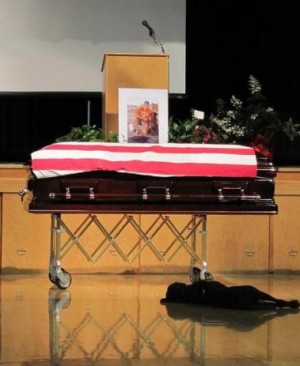 Few stories in the past week or so have touched more hearts that that of Hawkeye, the loyal Labrador retriever who lay down next to the flag-draped casket of his master, U.S. Navy SEAL Jon Tumilson.

One of the 30 U.S. military personnel killed in Afghanistan when their helicopter was hit by enemy fire on Aug. 6, Tumilson was remembered at a funeral service in Rockford, Iowa, on Aug. 19.

Hawkeye — not a military dog, but Tumilson’s personal pet — “led the family into the gym” where the funeral was held, as the Des Moines Register reports. And then he lay down.

A poignant picture taken by Tumilson’s cousin, Lisa Pembleton, has gotten lots of attention since then. So too have video reports aired and posted by local TV stations and the news networks.

Many readers wanted to know what was going to happen to Hawkeye and wondered if they could adopt him. There’s good news: According to Home Post, “Tumilson’s friend, Scott Nichols, will be Hawkeye’s new master.”