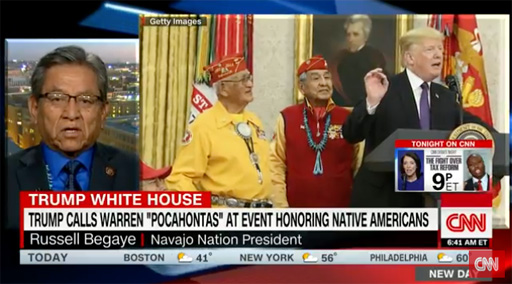 In the aftermath of Donald Trump’s crass reference to “Pocahontas” during a ceremony at the White House yesterday meant to honor Native American veterans of WWII, the leader of the Navajo Nation said he found the reference to be an ethnic slur and inappropriate for the occasion.

“This was a day to honor them, and to insert something like that — the word ‘Pocahontas’ as a jab to a senator — you know, that belongs on the campaign trail,” Begaye said. “That doesn’t belong in the room when our war heroes are being honored.”

Sonny Skyhawk, the founder of American Indians in Film & Television, told CNN that Trump deliberately held the ceremony in front of a painting of President Andrew Jackson who signed the Indian Removal Act. That legislation led to thousands of Native American deaths due to over 60,000 being forced to relocate.

Skyhawk said there’s no way Trump didn’t know the history, noting, “Andrew Jackson is one of his heroes.”

Watch the interview segment below.