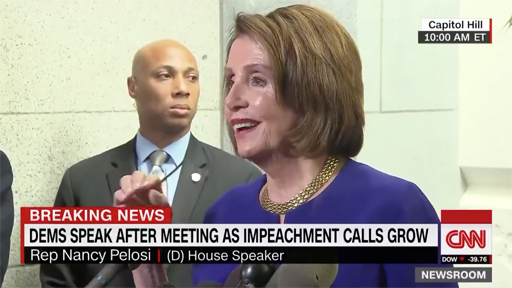 Donald Trump keeps pressing to hide more documents and suppress more testimony; more Democrats are shifting towards impeachment mode; and now, Speaker of the House Nancy Pelosi is starting to sound like her colleagues are moving her in that direction as well.

Following a meeting with House Democrats, Pelosi reporters that “no one is above the law,” and “we believe the President of the United States is engaged in a cover up.”

House Speaker Nancy Pelosi: “We believe the President of the United States is engaged in a cover-up” https://t.co/RhvismjmFt pic.twitter.com/dzi179fGu1

Pelosi was scheduled to meet with Trump and other lawmakers this morning regarding infrastructure legislation.

Mangling the English language once again, Trump sputtered, “Instead of walking in happily into a meeting, I walk in to look at at people that had just said I’m doing a cover-up. I don’t do coverups.”

Uh-huh. That’s why he’s telling his former lawyer, Don McGahn, to not testify before Congress. Because he’s totally-not covering anything up.

At the impromptu presser in the White House Rose Garden, Trump told reporters he told Democrats at the White House he couldn’t work with them while they were pursuing investigations into him and his administration.

Isn’t it his job to DO his job?

JUST IN: Pres. Trump responds to Speaker Pelosi’s comment that he’s engaged in a “cover-up.”

“Instead of walking into happily into a meeting, I walk in to look at at people that had just said I’m doing a cover-up. I don’t do coverups.” https://t.co/h1ImSdhRL5 pic.twitter.com/GucORhhcK4

CLAIM: “I think most of you would agree, I'm the most transparent president probably in the history of this country.”