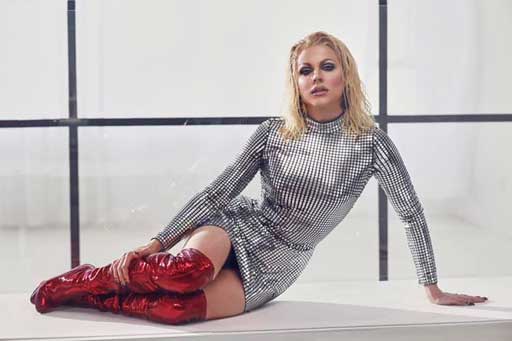 Act will participate in ‘Eurovision – Australia Decides’ on SBS on Saturday, February 9, where the winner will be determined via the combination of a public vote (50%) and the votes of a professional jury panel (50%).

She calls the dance-pop single “a dancefloor banger about coming together and fighting for the things we believe in.”

Echoing a message of social justice, she adds, “I think it’s so important to think about the basic human rights of others and to use our collective voices, minds and bodies to lift those people up and bring about change.”

The 36-year-old first made her way into the public spotlight during the debut season of Australian Idol in 2003. Making it to the Wild Card round, she was the first competitor to bring the art of drag to a reality show.

Since that time, she’s placed 3rd on Season 6 of RuPaul’s Drag Race, won the 2018 season of Celebrity Big Brother UK, celebrated her own 2018 holiday TV special, Courtney Act’s Christmas Extravaganza, and is now the host of the UK bisexual dating show, The Bi Life, on E!

And along the way, she’s help to educate her fans on LGBTQ issues like HIV stigma and gender fluidity.

“A sweet 16 years after Australian Idol, I have the chance to show the world how I have grown as an artist and performer and I am so excited,” says the drag superstar.

“Fight For Love” harkens back to the heyday of music videos with several glam looks for Act, dancing drones, and an undeniable dance beat perfect for the Pride dance floor.

This is certainly material Eurovision embraces.

Check out “Fight For Love” below.