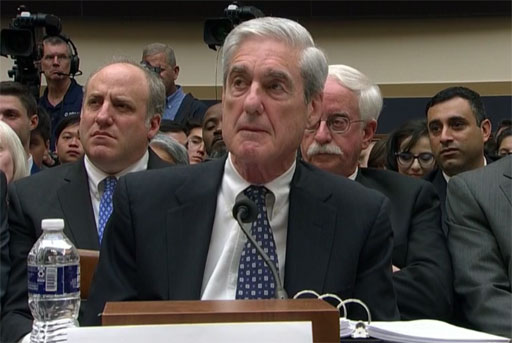 Very fatiguing to watch the ongoing testimony by Special Counsel Robert Mueller, but there has been one point made that will discussed for days.

After Donald Trump has repeated the reality he wants to see – that he was found ‘completely’ innocent by the investigation and that there was ‘total exoneration – Mueller was directly asked if his report ‘completely exonerated’ the president.

Here’s the clip everyone will be playing.

Here’s the moment that will get played over and over:

Nadler: “Did you actually totally exonerate the president?”

“You believe he committed—you could charge the President with obstruction of justice after he left office?”

Rep. Raskin (D-MD): 'You found evidence that the president engaged in efforts to encourage witnesses not to cooperate with the investigation.'

Rep. Lieu: "The reason, again, that you did not indict Donald Trump is because of OLC opinion stating that you cannot indict a sitting president. Correct?"

I’ll add that, due to a five-minute time frame allotted for each member of the committee, everyone is speaking very, very quickly. Members of Congress are trying to cite very specific pages and quotes from hundreds of pages of Mueller’s report and asking, “Is that correct?”

In that every word Mueller utters is going to parsed over and over, and that Mueller knows he’s under oath, he’s clearly trying to stay within the boundaries with which he’s allowed to speak to and be as accurate as possible.

I’m younger than Mueller by decades and having a hard time keeping up with how fast some questions are being posed.