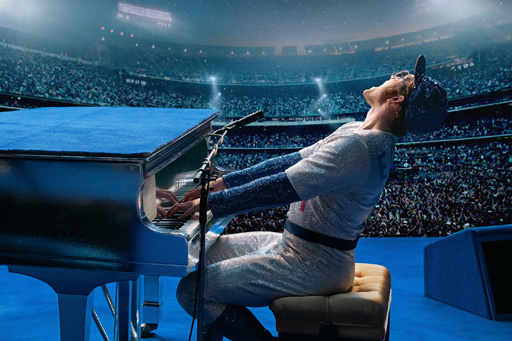 My buddy over at theOUTfront.com, Lawrence Pfeil, Jr., shares his review of the new Elton John ‘musical fantasy biopic,’ Rocketman, which opens in theaters nationwide today.

Elton John entering rehab as a winged demon is more than intentional, so are the heart shaped glasses through which his life has been spent looking to “be loved, properly.” If those images aren’t symbolic enough, the next one raises goosebumps and that’s only the first two minutes of the enthusiastically anticipated, Reginald Dwight, musical biopic, ROCKETMAN. 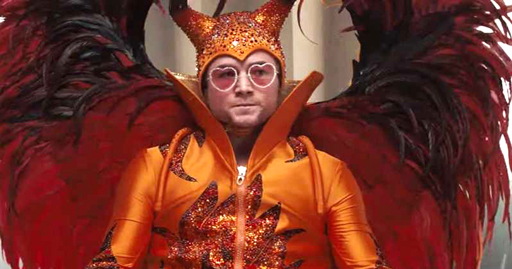 With a flamboyant and heightened sense of reality equal to Elton John himself, it’s difficult to imagine his life being told any other way than a movie musical. What’s difficult to achieve is repurposing his songs in a successful way that tell the story, not merely are the story. In Rocketman, both genre and material are stunningly reimagined into the life of a man adored by millions the world over, but never so alone.

It is rapturous and heartbreaking.

As the iconic Captain Fantastic, Taron Egerton delivers a sparkling and faceted performance to rival Sir Elton’s diamond stud earring. Every note sung, is Egerton possessing a vocal quality most like the mega-star mid-career. While embodying every chameleon change demanded by Elton John’s fans, he never loses Reggie’s human need for love. When success transforms the musician into a monster, Egerton finds the pain feeding it and the pathos giving it breath. 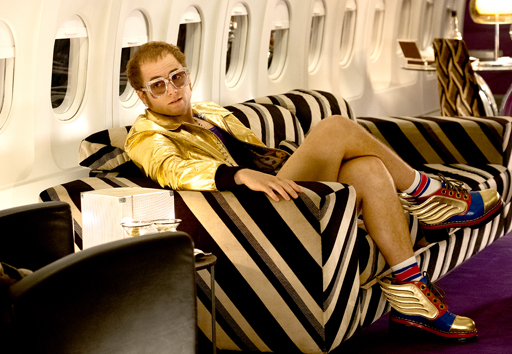 Traced the trajectory of Rocketman is a singular partnership in the music industry between the musician and equally brilliant lyricist, Bernie Taupin, played with unconditional compassion by Jaime Bell. Millions of record sales and countless awards and accolades aside, the flamboyant extrovert composer and notoriously private lyricist’s greatest claim to fame is never having had a fight, ever.

John and Taupin have an innate chemistry and understanding of one another, personally and professionally, which Egerton and Bell instinctively capture on screen. When their first hit “Your Song” comes to life, it’s like witnessing the wonder of creative genius in person. And those moments of revelation keep coming throughout the film.

Directed by Dexter Fletcher, whose prior film credits are surprisingly short (but include finishing Bohemian Rhapsody), Rocketman is stunning visual poetry start to finish. With brilliant attention to detail ala Baz Luhrmann, Fletcher makes Elton John’s most personal, private, and iconic moments vibrant and visceral. Musical production numbers leap off the screen to grab the audience and pull them into the rawest, heart wrenching moments of Reggie’s life.

Every choice made in telling this story was a risk, any one of which could have easily caused Rocketman to be a catastrophic disaster upon liftoff. But fortune favors the bold, and if Elton John is anything, it’s bold.

Most people tell their story from the top, so it takes a kind of courage, acceptance, and self-deprecation to tell Rocketman from the rock bottom of rehab. But, as anyone who’s been their knows, hitting rock bottom is necessary to relaunch. A constellation of superb performances, super nova production numbers, and unexpected moments like meteors out the darkness of space make Rocketman stellar.

Lawrence Pfeil, Jr., is a freelance writer/playwright and has reviewed film and theatre, both on and off Broadway, for media outlets including the New York Blade and Edge Publications.